Rescuing the rescuers: Center creates resources to help firefighters weighed down by the job

More firefighters die each year by suicide than in the line of duty. The emotional toll the job takes weighs on people – the traumas they see, the near-misses on their own lives, the people they couldn’t save. But in such a deeply ingrained, male-dominated profession, seeking mental health treatment has largely been frowned upon. That culture seems to be changing.

Gerald Mishoe, executive director of the Lowcountry Firefighter Support Team, says he’s a living example of leaving behind the macho “suck it up” attitude that typically pervades the traditional fire service and realizing a better life was, in fact, possible.

The son of a firefighter, he joined the fire service in 1967 and put in 25 years. But in 2007, the city of Charleston asked him to return in a new role – as a liaison to therapists who were having a tough time connecting with firefighters.

The Sofa Super Store fire had just claimed the lives of nine Charleston firefighters. Emotions were running high, and trust in leadership was low. The city sent therapists to firehouses, but firefighters weren’t interested in talking to people who didn’t understand their lives or culture. Mishoe was to be the link between the two groups. But in order to do that effectively, he knew he had to walk the walk and avail himself of the same therapy he was promoting. It made all the difference.

“I’ve learned a lot about myself,” he said. “There was a lot of baggage and a lot of demons inside my head that I had never dealt with.”

Today, he runs the Lowcountry Firefighter Support Team, a nonprofit that trains local therapists on how best to interact with firefighters and teaches firefighters themselves how to act as peer counselors. His team works with fire departments in 23 counties in the coastal and Pee Dee areas of South Carolina.

He’s helping firefighters far beyond South Carolina, too, serving as the only fire service representative at the Center for Firefighter Behavioral Health, based out of the MUSC College of Nursing.

The center got its start a few years after the Sofa Super Store fire, when the National Fallen Firefighters Foundation reached out to Kenneth Ruggiero, Ph.D., now a professor in the College of Nursing and SmartState Endowed Chair of the Technology Applications Center for Healthful Lifestyles (TACHL), because he and a colleague had been developing web training in the mental health field.

The foundation had money for a yearlong effort on suicide prevention and turned to Ruggiero for help. From that first contact came Helping Heroes, a web-based tool to train therapists new to the world of fire service.

Mishoe said that therapists can do good work, even if they don’t know anything about the fire service, but they can provide much better help if they understand what firefighters do and the conditions they work in. Developing a rapport is critical as firefighters often do not seek help for mental health issues, he said.

“We are traditionally people who hold things very close. We are people who join the fire service and EMS world because, quite frankly, we want the excitement of saving lives and rescuing people,” Mishoe explained. But that mindset can have a downside. “Because we see ourselves as rescuers and lifesavers, we tend to not let people know when we’re having problems.”

The Center for Firefighter Behavioral Health is working to change that.

Ruggiero founded the center in 2011. It’s currently co-directed by Angela Moreland, Ph.D., an assistant professor at the National Crime Victims Research and Treatment Center at MUSC, and Tatiana Davidson, Ph.D., an associate professor and co-director of the Telehealth Resilience and Recovery Program at MUSC.

The center focuses on developing technology-based resources and apps to train therapists and also to help firefighters help each other.

The self-help resources on the center’s website include information about preventing suicide, managing alcohol use and dealing with stress. Firefighters from across the country appear in video clips, acting out situations that demonstrate suicide red flags or speaking candidly about the stress in their own lives.

Rodney Profit, retired battalion chief with Summerville Fire and Rescue, is one of the Lowcountry firefighters who appears in the videos. He talks about the effect the Sofa Super Store fire had on him – he knew four of the men who died; three of them had been in his wedding – and how the specter of that fire followed him on every call after that. He also describes the gut-wrenching self-doubt he experienced about decisions he had to make, including during one fire that killed a mother and child.

“When we got there, it was well-involved, and there was little to nothing we could do, but we did our best,” he said.

Because of the extent of the fire, Profit couldn’t send his firefighters in.

“Tactically, I know I made the right decision. But morally – should I have sent them in?” he said. Following that incident, he began contemplating retirement, he said.

These are the mentally and emotionally taxing life-and-death dilemmas firefighters face every day. Moreland said that these are precisely the types of issues their program addresses. Because of the strong stigma against mental health services, the center’s self-help apps seek to build upon the built-in peer support that exists in firehouses, because firefighters remain together after incidents, unlike police officers, for example, who disperse to their own vehicles or beats after an incident.

Moreland said the center holds focus groups and listens to people like Mishoe to understand the needs, then develops products to meet those needs. Their latest is a self-help module for family and friends of firefighters, which will soon launch.

Moreland and Leigh Ridings, Ph.D., a postdoctoral fellow in the Telehealth Resilience and Recovery Program, have also recently completed a handbook detailing additional considerations for fire departments that are hiring an increased number of military veterans.

The veterans say they don’t want to be treated any differently, Ridings said, but they may have compounded traumas from their military service on top of their fire service. It’s something for fire chiefs to be aware of as they’re on the lookout for signs of stress in their firefighters, she said.

Davidson said the center has heard from others – including law enforcement, emergency medical services, coroners and dispatchers – clamoring for resources aimed at their fields. The center’s staff are looking into other possibilities, but the funding from the Federal Emergency Management Agency and National Fallen Firefighters Foundation is directed specifically toward firefighters.

And there are still more unmet needs for firefighters, Moreland and Davidson explained. Moreland said they recently got a request to develop apps geared toward wildland firefighters.

“We’re still developing the resources,” Moreland said. “We’re just trying to disseminate them across the U.S.” They maintain a Center for Firefighter Behavioral Health Facebook page to help spread the word and encourage sharing of these free resources nationally. 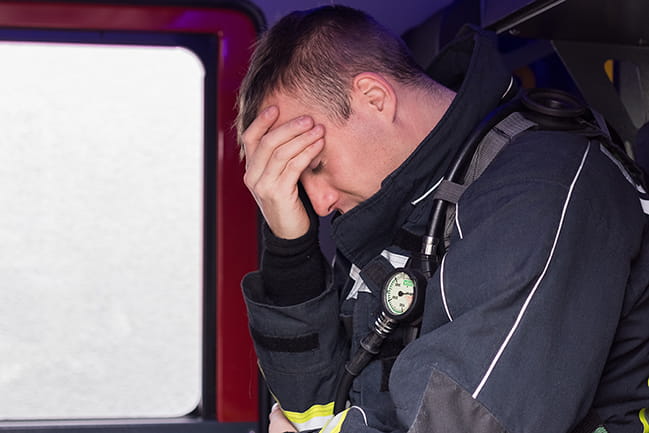 The Center for Firefighter Behavioral Health, an initiative within the College of Nursing, brings behavioral health resources and education to firefighters and their families.