No one wants cancer. Thom Schmenk sure didn’t.

But he turned an otherwise negative situation into a meaningful experience, authoring two books, celebrating a five-year cancer-free anniversary and raising money for Hollings Cancer Center’s sarcoma research at the Medical University of South Carolina.

Schmenk’s journey began the day he retired in October 2012. His first stop? Walmart, to buy a bike.

In the middle of enjoying his first summer of retirement, he noticed a new feature on his leg.

“This golf ball-sized lump shows up on the side of my hamstring,” Schmenk says. “I ignored it for a while. And then it started getting kind of sore to the touch.”

Thinking it was a result of his new hobby, he sought out his first medical opinion – from a bike shop employee, he says, laughing. Schmenk thought maybe the lump was caused by his bike seat. He used it as an excuse to get a new bike saddle, but when that didn’t solve the problem, Schmenk had to give in and go see his primary care doctor.

He was told it probably was a pulled muscle, to ice it and come back in two weeks. Two weeks passed, and the lump persisted, so the physician told him to trade ice with heat.

“Well, when I put hot on it, it lit up,” Schmenk says. “It turned all sorts of colors, and it got bigger.”

He was referred to an orthopedist from a nearby hospital system and waited two weeks to get an appointment. The orthopedist ordered an ultrasound, which took another week. It showed nothing.

It was October when the doctor finally ordered an MRI. The “C-word” popped into Schmenk’s head when a nurse handed him three copies of his MRI instead of one. Back to the orthopedist he went with a copy in hand.

He was referred to Lee Leddy, M.D., an orthopedic surgeon at Hollings Cancer Center. The doctor was booked solid, but Schmenk was desperate to get some answers. Leddy’s office managed to fit him in the Tuesday of Thanksgiving week.

When Leddy came into the exam room, he did one of his signature moves. He rolled out the paper on the exam table and began drawing to explain what Schmenk had and the options to treat it.

“He's laying out this battle plan on the paper,” Schmenk says. “We're going to do a biopsy up and down that muscle and see what's going on.”

Schmenk waited anxiously for the results. After what felt like forever, his phone rang. On the other line was Leddy with news that would change Schmenk’s life. “He says, ‘There's no way to sugarcoat this,’” Schmenk remembers of the phone call. “He says, ‘It's definitely leiomyosarcoma.’”

“You could tell the woman was brilliant, but, at the same time, she never talked down to you,” he says. “We didn't leave there with any doubts. We knew exactly what we were up against.”

He would endure radiation five days a week for six weeks. They would wait and see how it affected the sarcoma. Six weeks later, his leg, he said, had the “world’s worst sunburn.”

“I remember Leddy walking in after surgery, and he says, ‘You're going to be cancer free for your birthday.’”

They removed his gracilis muscle, where the sarcoma was encapsulated. The sarcoma had reduced in size and was 90% cancer free. The other 10% no longer had the ability to metastasize.

“Leiomyosarcoma can be a very aggressive cancer, given the right circumstances. But given my circumstances, fortunately, it didn't go anywhere,” Schmenk says.

For the first two years after his surgery, he would go back every 90 days for a checkup. That’s where he got the idea for the title of his first book – "Living Life 90 Days at a Time: A Sarcoma Survivor’s Journey."

The book details Schmenk’s cancer story and gives tips to other cancer patients and survivors, which include:

Now, he and his son, Todd, are working together to write a second book – "Being Team Positive: Building a Support Team for a Serious Diagnosis."

“The book is designed that if your life is hit with a significant diagnosis, it explains what to do, what to say, what not to say,” Schmenk explains.

Even though it’s been five years since he heard the words “cancer free,” he thinks about his cancer daily.

“It's kind of like driving down the road,” he says. “You can't help but look in the rearview mirror and wonder if anything is catching up to you from behind.”

When Leddy called in November of 2013 with the results of his biopsy, Schmenk’s outlook on life changed. He wakes up every day with one mission in mind – defeating sarcoma.

“What am I going to do today to fight this damned disease? What email am I going to send? Who am I going to go encourage? How can I get somebody to donate $1? What did I do today? I've tried every day to do something.”

In March, Schmenk spent an afternoon with Jessica Thaxton, Ph.D., a Hollings Cancer Center researcher, in her lab that studies sarcomas.

What was really meaningful to her was that he asked how much of her time she spends trying to get funded, she says

“The fact he was able to understand how funding is a true barrier that impacts me as a researcher and the fact he was very excited to contribute to solving the financial problems that labs face was really awesome.”

Because sarcomas are so rare, Thaxton is the only sarcoma researcher at Hollings Cancer Center, which drives Schmenk to work hard to raise money for her work.

“When I see Dr. Thaxton’s face, the only word I can say is passionate,” Schmenk says. “She’s so passionate about this very narrow focus that she's assumed.”

He has raised money by asking for donations and participating in sarcoma charity events like Swing for a Cure that recently raised $133,000. He also was the speaker at this year’s event, where the event committee surprised him with the Harper Drolet Award for his work in supporting sarcoma research. In the past, he felt uncomfortable attending the event, not wanting to flaunt his survivorship.

“I had a real hard time with it,” he says. “I'm trying to be happy, and there are all these people that are there because they lost somebody. You don't talk about survivor’s guilt.”

But this year, Leddy wanted Schmenk to treat the event as his five-year cancer-free celebration.

“This five-year mark is my time to pay it forward,” he says. “What difference can we make going forward?” 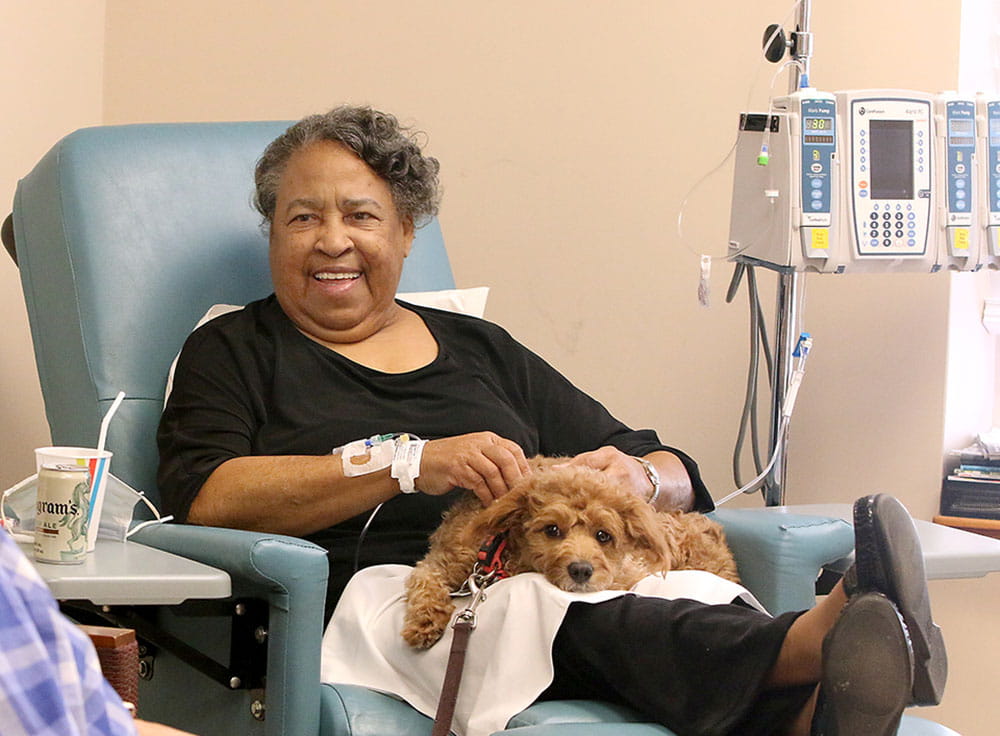 Balloons decked hallways at Hollings Cancer Center as the word spread that MUSC Health was named one of nation’s top hospitals in the treatment of cancer. 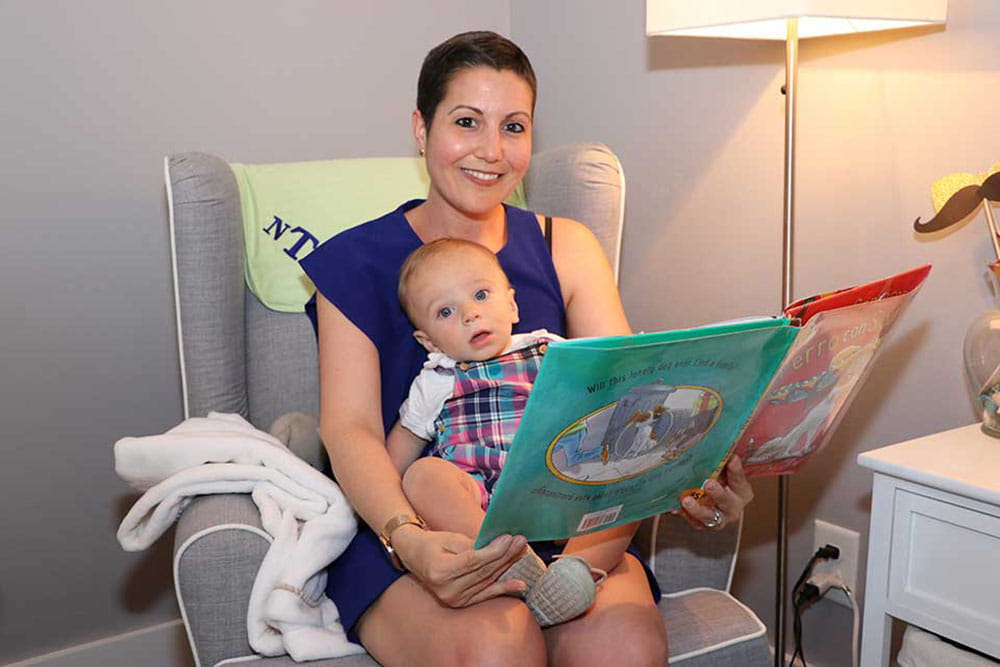 Being six months pregnant in Charleston in July can be trying. Heather had resigned herself to the heat. What she hadn’t counted on was the cancer diagnosis.