Play-Doh, bubbles, painting stations, a mini bounce castle, a food dye experiment and to top it all off – pinatas! The laughter and goofy kid energy bouncing off the walls at the College of Health Professions is a pretty good indication that the children at Camp Hand to Hands are enjoying themselves. But this camp, now in its 18th year, serves important therapeutic and educational purposes.

It originally started as an elective course for occupational and physical therapy students to get hands-on experience, said Patty Coker-Bolt, Ph.D., a professor in the Division of Occupational Therapy. From there, it grew to become a model for camps at other institutions because of its effectiveness. 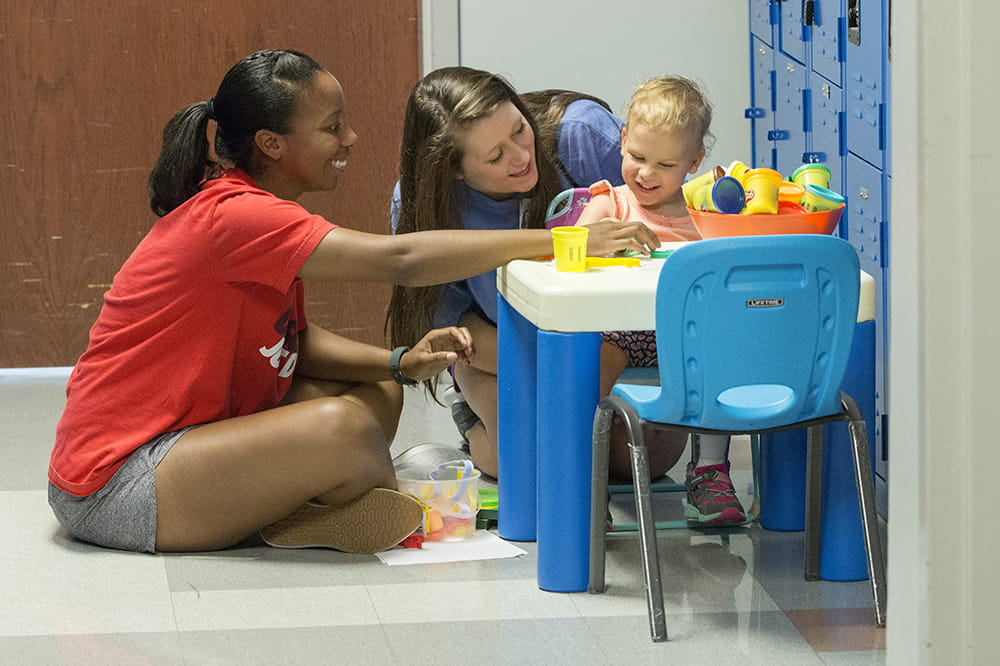 CHP students and children with one-sided weakness both learn and grow at this intense but fun camp.

CHP students and children with one-sided weakness both learn and grow at this intense but fun camp.

The camp uses constraint-induced movement therapy for children with weakness on one side of their bodies, known as hemiparesis/hemiplegia. The children wear mitts on their strong hands, forcing them to use their weaker hands to complete the activities.

Although the camp was meant to teach the college’s students, educators quickly realized that the children in the program were making huge gains, thanks to the condensed format – they get 30 hours of occupational and physical therapy in one week, compared to a typical schedule of one hour of each per week. When the professors compared the children’s abilities before, immediately after and six months after the camp, they found the children had gained and maintained dexterity, Coker-Bolt said.

Most of the students are interested in working with children, but not all, said Cindy Dodds, Ph.D., an associate professor in the Division of Physical Therapy.

“The same principles that they learn here in camp really do apply to the adults who have had strokes as well,” she said.

The activities are deceptively simple.

“I was just doing a bubble activity with my camper,” explained occupational therapy student Brittany Pinson. “I know it looks like a simple activity, but it gets them to reach up and use that hand to pop the bubbles.”

Keeping things fun helps the children to stay motivated. Every afternoon after the children leave, the students redecorate the rooms and hallway – even the elevator – in a new theme for the next morning.

Caroline Rushing, mother of camper Drew Rushing, 7, said Drew looks forward to the camp every day – something that hasn’t always been the case with camps elsewhere.

Drew was born six weeks early at only 3 pounds, 3 ounces. His left hemiplegia didn’t become obvious until he was about 6 months old and wouldn’t reach for anything with his left hand.

Now, as a rising second grader, he loves baseball but can’t keep a glove on his left hand. Instead, he wears the glove on his right hand and removes it to throw the ball. The other kids will tell him he’s wearing the glove on the wrong hand or ask why he’s doing it that way, and often, he doesn’t want to deal with their questions, his mother said. It’s nice for him to be around other kids with similar issues.

In fact, the Rushings, who are from Colorado, found out about Camp Hand to Hands when they met Duncan Clark, 7, and his family at a different camp last year. The Clarks are from Lexington, South Carolina, and mom Brantley Clark said the five-day intensive regimen makes a huge difference, as does the cheery attitude that the MUSC students bring.

“They do such a great job making it fun,” she said.

Pinson said the camp has been a great opportunity to put into practice the skills they’ve been studying in class this summer. During class, the students learn about constraint-induced movement therapy and design a plan for each child based on a questionnaire the parents fill out. Drew’s plan, for example, included working on the motions needed to catch a baseball.

The last week is spent putting their plans into action.

“It’s been amazing – in just a matter of four days – to watch them initiate a task or activity with that weaker side and opening up their hand more,” Pinson said.

Emily Williams said she feels blessed that her daughter Nora, 3, gets to attend this camp. Nora was born with a heart problem that went undiagnosed until her parents brought her to an emergency room in Greenville at 7 weeks. She was immediately flown to Charleston and operated on the next day, Williams said, but remained at the hospital until she had a heart transplant at only 8 months old. The family ended up moving to Charleston and learned about the camp from Nora’s occupational therapist, Paige Merrill.

The number of children in the camp is determined by how many students sign up for the course. Coker-Bolt and Dodds maintain a ratio of four students to each camper. Most of the children are local, although there are a few who travel to Charleston, like Drew and Saviour, a Ghanaian orphan who previously has had therapy at MUSC.

The camp itself is free, thanks to support from the Camden Scott Meyers Pediatric Fund and the Coastal Community Foundation.

“That’s really important to me,” Coker-Bolt said. “There are a lot of costs associated with raising a child with disabilities.” Similar camps can cost a family thousands of dollars, she said.

The camp can’t reach every child who needs it, but the idea behind the camp is spreading. Dodds said past students who have worked at the camp have gone on to establish their own camps. In addition, therapists at other institutions have visited Camp Hand to Hands to see how it’s designed and implemented, Coker-Bolt said. 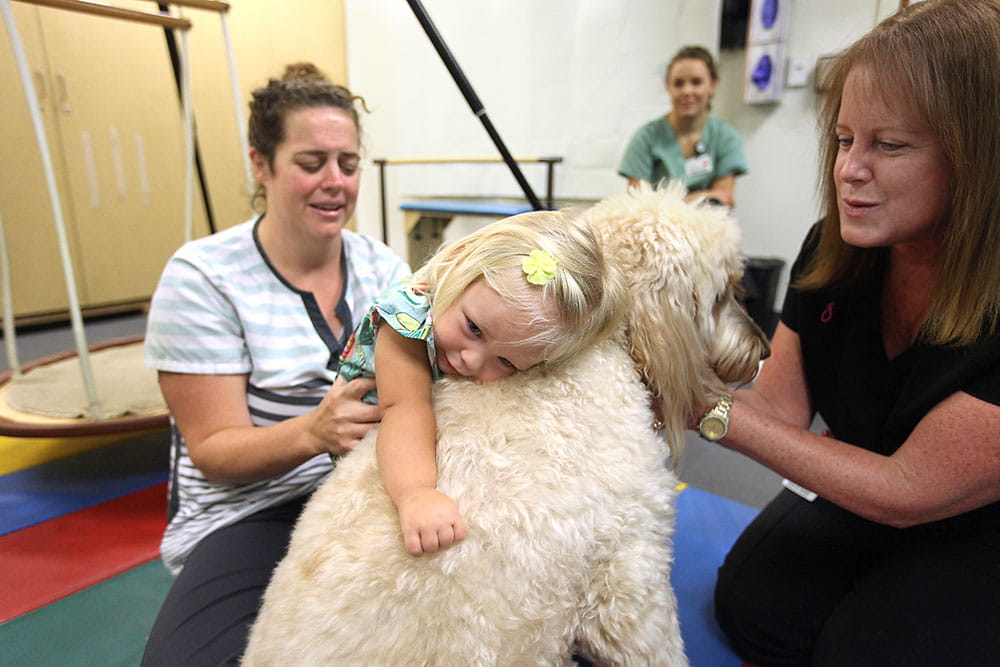 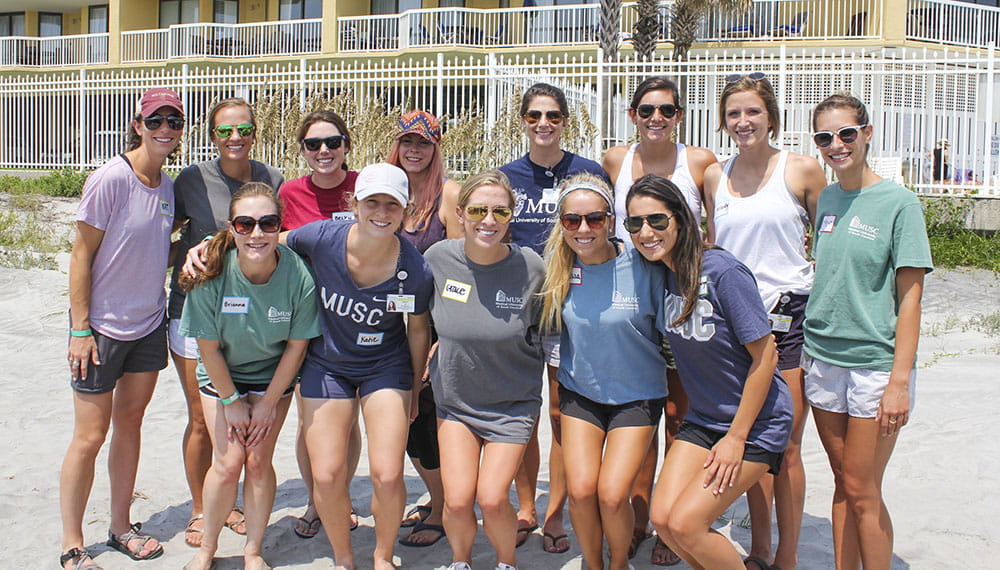