The calm before, during and after the storm

EDITOR'S NOTE: Catalyst News writer Bryce Donovan spent Hurricane Dorian at MUSC as a part of Team A. The following are his observations from inside the hospital during that time.

People always ask me what it’s like being in public relations.

I’m just kidding. Literally no one has ever asked me that question in my entire life.

Not even my family. I honestly think my mom has convinced herself I’m a doctor because I work at a hospital.

Anyway, that was BEFORE Hurricane Dorian.

As a member of Team A at the Medical University of South Carolina, I am considered essential staff (take that, Mom!) and expected to ride out any major storm at the hospital with core administrators and clinicians. As a storyteller, it’s my duty to document what is going on, to let people both inside and outside of the hospital walls know everything is OK as well as share the tales of courage, heroism and human decency that define what MUSC stands for. Plus, it got me away from my kids for 48 hours.

So last Wednesday morning, when it was obvious that Hurricane Dorian was going to affect the Lowcountry, I packed my sleeping bag, camera and Cool Ranch Doritos and drove to the hospital before the first bands of the storm arrived. Joining me were my boss Public Affairs and Media Relations director Heather Woolwine, MUSC Catalyst News editor Cindy Abole and media relations coordinator Tony Ciuffo.

I would be crashing in Room 299 of University Hospital, an administrative office with just enough room on the floor for my air mattress and 25 of my favorite stuffed animals. I didn’t know it at the time, but this would become my home for the next two days. If you’ve ever been on a cruise ship before, it’s just like that. Only without the shore  excursions or swimming pools or mimosa bar or … you know what? Forget I even mentioned that.

After getting settled, I made my way to the MUSC Command Center — a conference room filled with dozens of higher-up MUSC folks charged with handling any and all issues the hospital might face before, during and after the storm.

As soon as I walked in, it was like something right out of a movie — tons of people crammed around a table, talking and strategizing, while on the walls surrounding them were TVs displaying local news, weather and a CCTV feed of 16 cameras from around campus. In neat little stacks on the table were healthy snacks and water. Well, sort of. You see, in times of high stress, even doctors have been known to eat garbage. Hey, we’re human.

Before I could get my hands on some Cheese Whiz (relax, I’m pretty sure it was organic) I fell in with President David Cole and other hospital leaders — Tom Crawford, Patti Hart, Eugene Hong, Phillip Warr and Peter Zwerner — to make the rounds. It’s a way for leadership to let employees know that they’re there too, and they appreciate the sacrifices everybody makes to continue to provide top-level care, even — heck, especially — in the face of a natural disaster. And I’m not just saying this because I hope he reads it and gives me a raise, but Dr. Cole’s presence really did seem to make a positive impact on everybody he and his crew visited.

A few hours later, back in the Command Center, things took a turn for the worse as the storm’s path shifted slightly west, putting Charleston more directly in the crosshairs. Based on the looks of the faces around me, it was going to be a long and stressful night. At least for the people in that room.

Six floors up, in the auditorium of the Storm Eye Institute, dozens of off–duty employees had a different idea of how the night was going to go. They were gathered for a little late–night karaoke. Now if you thought that a bunch of people cooped up in a hospital during a hurricane singing Journey and Cardi B to one another would be awkward, you would be right on the money. But you know what? It was also really fun. The folks in that room — many of whom had never even met one another before that night — bonded through music, off-key voices and uncontrollable laughter. It was a perfect counter to the storm that raged outside.

Eight hours later, I woke up to what smelled like a rotting animal. Turned out it was me. Not to be dramatic, but I potentially could have robbed a bank with my breath. Anyway, I caught a break when Cindy told me about an open room on the same floor with a shower. Well, more accurately Cindy and Tony caught a break, since they were the ones sharing a suite with my stink.

Once back in the Command Center (where I once again resembled a human being), the room was abuzz. There was a glimmer of hope that, weather-wise, we might get lucky. A slightly lower-than-expected high tide a few hours earlier had given rise to more positive thinking. Even still, as the sun began to rise, it became obvious that the wind was picking up and the waters, slowly rising. Naturally, I decided to go outside.

In addition to its reputation for world–class health care, MUSC has a few toys, like its light medium tactical vehicle — basically a Humvee on steroids — called Big Blue that can drive through up to four feet of water. If staff or patients need transport from one part of the campus to another, it’s at the ready. Tony and I snagged MUSC emergency manager Bryan Wood and headed out to survey the roads.

Somewhere along the line, I got the brilliant idea to hop out and shoot a video of the truck driving by. Minutes later, as a tidal wave of God–knows–what showered down on me, I started to question my intelligence. But there was an upside to potentially getting pneumonia and dysentery, because the video I shot ended up on NBC Nightly News that day. Not to brag, but Lester Holt and I are best friends now. 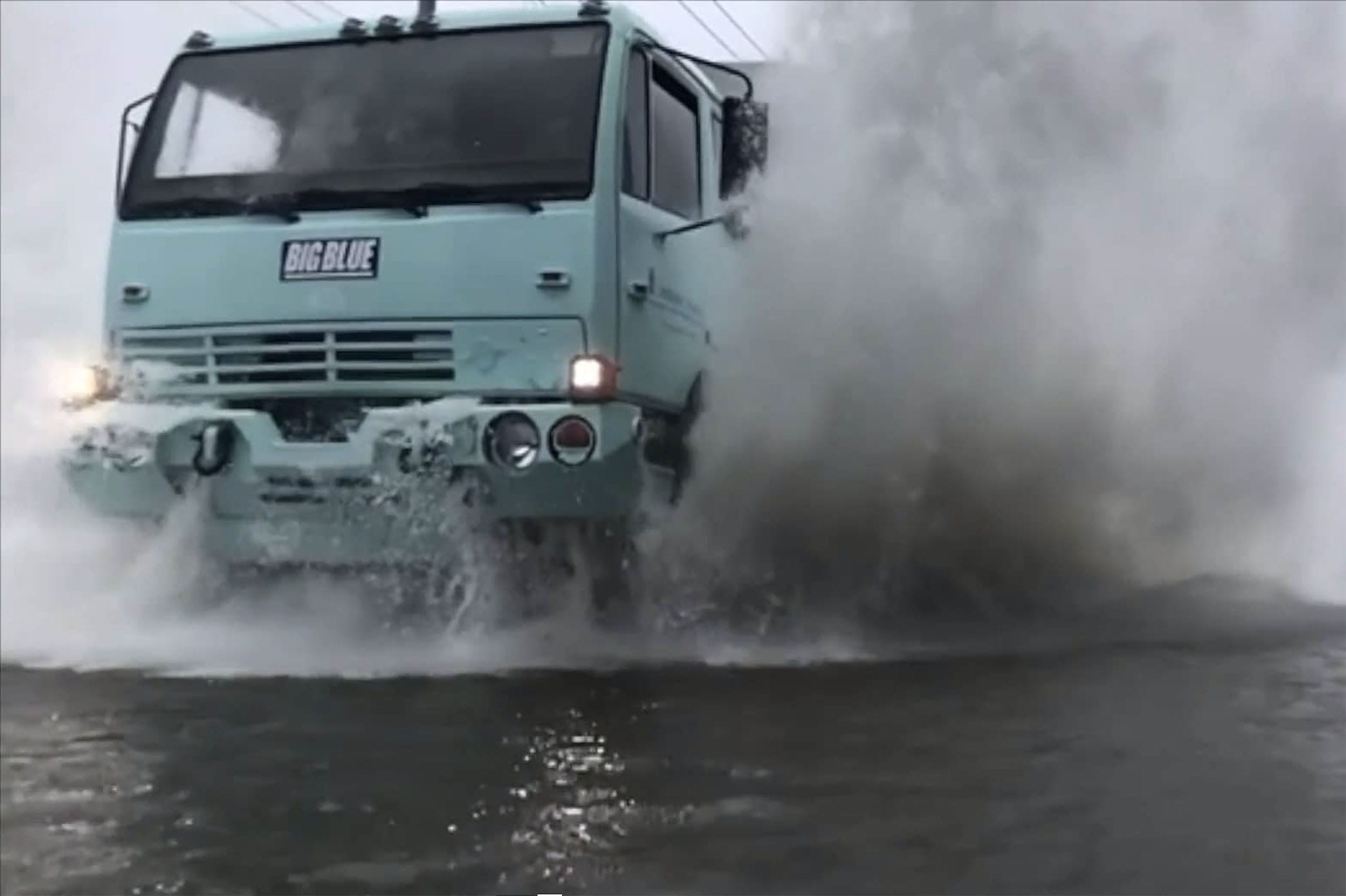 MUSC's light medium tactical vehicle, aka Big Blue, can plow through up to four feet of water.

MUSC's light medium tactical vehicle, aka Big Blue, can plow through up to four feet of water.

Later, as the wind finally died down and the rain began to wane, it was evident that Charleston was spared Mother Nature’s full wrath. But it was a great opportunity for MUSC to see what it’s made of. The answer: We’re solid.

So God forbid — but when the next one of these things is bearing down on South Carolina, just know we will be ready.

And I’ll be right there leading the way. Sure, it’ll kill me to miss another episode of “PAW Patrol,” but hey, these are the kind of sacrifices you make when you’re in public relations.