At 20 weeks pregnant, Ratanya Manigault discovered she was expecting her second baby girl. One week later in April, she discovered she had stage 2 triple-negative breast cancer.

“I felt like somebody punched me. I didn’t know what to do,” Manigault says.

Fast-forward to October, and Manigault now is enjoying time with her second daughter, Serenity Anwar Manigault, who was born August 21 at 6 pounds, 13 ounces. “Perfect” is the only word her mother has to describe her.

A miracle is what others might say. Manigault, who was referred to Hollings Cancer Center at the Medical University of South Carolina, had a little over two weeks to recover from her planned C-section before she underwent a bilateral mastectomy. This surgery was a success, with good news that no cancer was found in her lymph nodes. She is now in recovery and plans to have reconstructive surgery somewhere between six months and a year.

It’s been a long journey to get here.

In early April, the 33-year-old mother of a 4-year-old was blissfully preparing her nursery for her second child. Married for five years, she was beyond excited for the new addition to her family. Luckily, expecting another girl meant she didn’t need to buy all new clothes; she also planned on using the same crib that her first daughter slept in years ago.

Late one night, though, while putting on pajamas to get ready for bed, she felt a lump in her left breast. Since she already had an appointment scheduled with her OB-GYN the following week, she decided to bring it up then. At the end of her appointment the next week, she casually brought up the lump, and her doctor reassured her that it’s normal for breasts to change during pregnancy. To be on the safe side, she recommended she go in for an ultrasound — she also included a biopsy on the order, just in case it was determined necessary.

Two days later, Manigault arrived for her appointment. The radiology technician performed the ultrasound but wasn’t sure what she was looking at. She told Manigault she’d need a biopsy, and it would be about two to three weeks before she could schedule her for one.

Knowing the importance of self-advocacy, Manigault immediately spoke up and said a biopsy was already included for her appointment that day. The technician went to double-check and, sure enough, it was included. “She told me she was so glad I spoke up because it could’ve been almost a month before I would’ve been able to come back.”

The biopsy was done that day. Manigault went home to wait on her results. As a patient services coordinator at Amedisys Home Health and Hospice Care, she knew how critical these situations could be. “I work in health care, and I know that when we do lab work on patients, if it’s critical, we call right away, even on the weekend. So, in my mind, I’m thinking, if it’s critical, they’ll call this weekend.”

She went about her weekend, spending time with her husband and daughter, trying not to think about the call that could change her whole life. No one called. She started to relax.

“First thing Monday morning, I got the call that I had abnormal cells. Cancer,” she says. “I was lost – initially. Nobody wants to hear that, and I wasn’t expecting to hear that so young in my life. I had to let it all process, and it got better over time.”

After her worst fears were confirmed, everything moved at lightning speed for her. She got referred to MUSC Hollings Cancer Center and around noon the next day, she was already getting calls from Denise Kepecs, a breast nurse navigator, to schedule her appointments with Young Lee, M.D., an oncologist, and Christopher Goodier, M.D., an OB-GYN in Maternal Fetal Medicine.

Manigault confesses she was not excited to be a patient at Hollings initially. She was worried about being treated at such a large organization and getting lost in the shuffle. Those fears were quickly quashed by meeting with her team: Lee, Goodier and Mark Lockett, M.D., a surgical oncologist.

“They were so proactive. When I would leave one appointment with Dr. Lee, she would immediately call Dr. Goodier. Being pregnant, it’s so important that they coordinate and talk because just because something may be right for me, we also have to think about my baby. They commit their time, their care and they show great compassion. They treat you like they are gonna beat this, they are gonna fight this with you. Like you’re not in it by yourself,” she says.

The other advantage of being at MUSC Hollings Cancer Center is that it is a National Cancer Institute-Designated Cancer Center, one of 71 such centers in the nation and the only one in the state.

That means it has researchers looking for treatments to cure cancer, particularly ones like what she has since triple negative breast cancer can be more aggressive and difficult to treat.

Because Manigault was only 32 at the time she was diagnosed with breast cancer, she was tested and discovered to have a mutation in the BRCA2 gene. Women who have a BRCA1 or BRCA2 gene mutation have an increased risk of breast cancer and are at a higher risk for developing triple-negative breast cancer, which she has.

Hollings Cancer Center researcher and oncologist Antonio Giordano, M.D., Ph.D., is currently conducting three promising research projects on triple-negative breast cancer. There are three main receptors in breast cancer: ER, estrogen receptor; PR, progesterone receptor; and HER2, human epidermal growth factor receptor two. Triple negative means that the three receptors are all negative. When all of the three receptors are negative, the subtype is called triple negative. It affects 20% of all the breast cancer patients seen in the United States and has fewer treatment options compared to other subtypes. It’s also more likely to affect younger people, African Americans and Hispanics.

“It's important to offer additional treatment options to our patients. Triple negative is such an aggressive type of cancer that has such a poor prognosis,” says Giordano.

While Manigault wasn’t happy to discover that she had a predisposition to being diagnosed with triple-negative breast cancer, it did help her understand why she was dealing with a cancer diagnosis at such a young age.

“It was already in my makeup. Before they tested me, they told me they suspected I might have it. It made sense,” she says.

As Manigault looks forward to the holidays with her daughters, she wants to share that women can be pregnant, have cancer, receive chemotherapy and give birth to a healthy baby.

“Just like any medications, there are risks and side effects, but medicine and technology have evolved so much. If you are diagnosed while pregnant, you don’t have to terminate. You can still bring a beautiful life into the world. Some people think that you can’t fight cancer while pregnant. People brought up termination to me all the time, but it was never a thought in my mind. Never a possibility. And my doctors never brought it up as something I needed to think about.”

Her hope is to hear these words one day: “‘Mrs. Manigault, we did all the scans, looked at everything, and you are cancer free.’ That thought runs through my mind multiple times every day. And then we are over it. We are done. We are good.”

In the meantime, she’s thankful for research that’s being done that makes that vision more of a reality. She is focused on beating cancer and being there for her family. 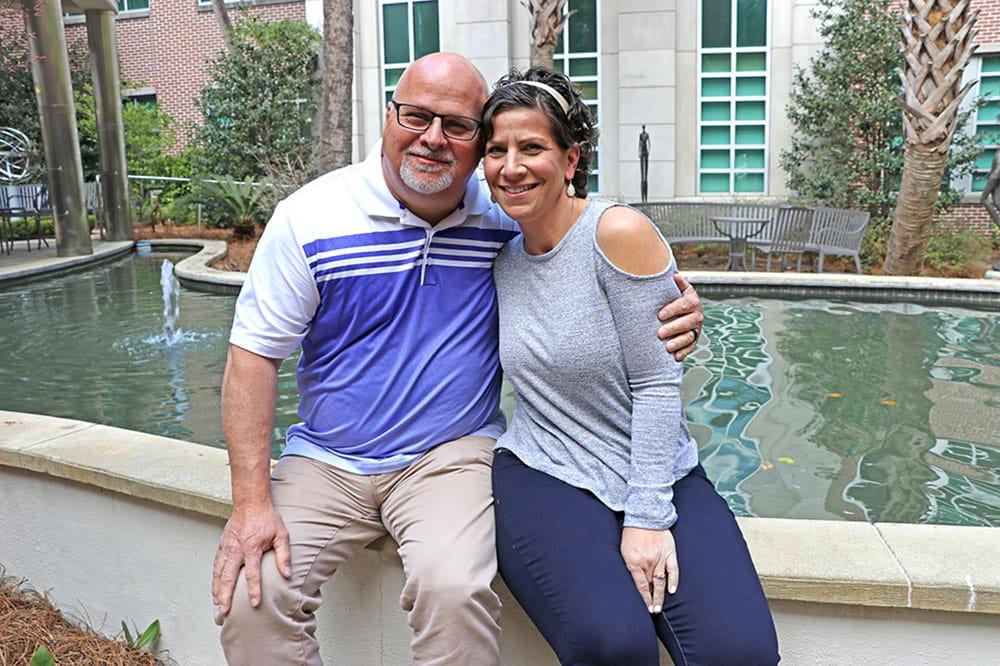 Hidden Scar surgery provides a woman the opportunity to preserve the natural look of her breast without a visible scars. 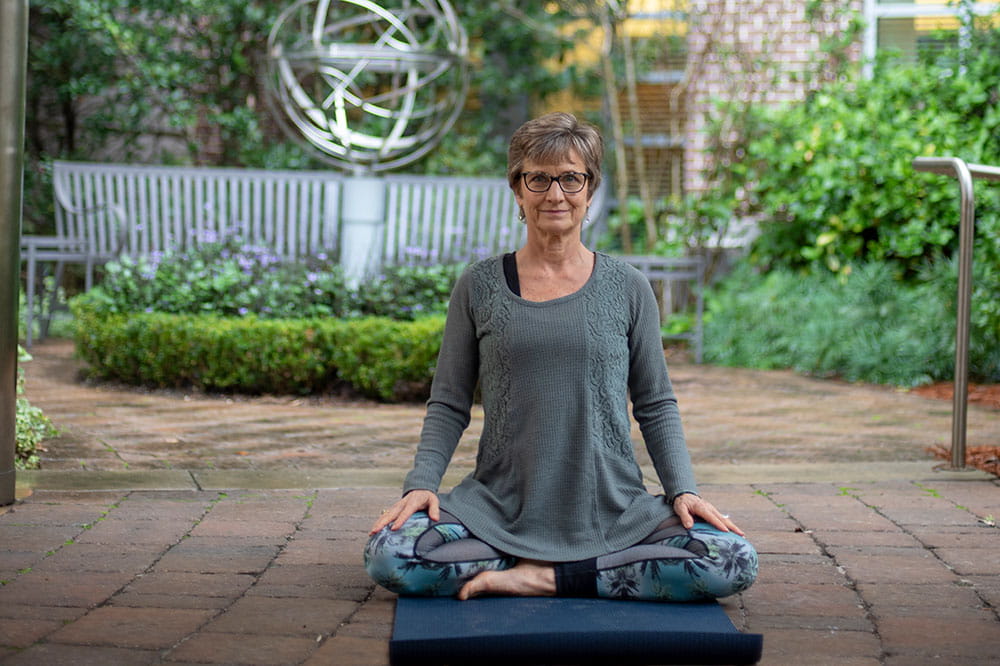 Hollings Cancer Center will roll out new mind-body class for patients and survivors to enhance health.