North Charleston native on her way to dream career as surgeon

Gathered together for a common purpose around the operating table, with nurses, techs and the experienced surgeons she hoped to emulate, Ka’la Drayton felt a certain familiarity.

"Being in surgery and having everyone at the table, it almost made me feel like a child back home with my grandmother, Carrie Drayton. We would always have Sunday dinner together and come together at the table,” she said.

Her grandmother’s death after her second heart surgery, when Drayton was 11 years old, inspired Drayton to pursue a medical career. The young girl sneaked into the ICU, despite her mother, Kim Drayton, telling her to stay in the waiting room with her younger brother, Abraham Doctor IV. She listened as the surgeon explained what was happening to their grandmother.

“At that moment, I knew I wanted to be the person on the other side of it, trying to do everything I could to prevent this from happening.”

The path to a medical degree was far from clear for the daughter of a single mother in a family where no one had attended college. But Drayton was determined.

Today, she is a graduate of the Medical University of South Carolina College of Medicine headed to a general surgery residency at the University of Connecticut.

Faculty and staff who worked with her have been impressed with her drive and determination (“I can’t see myself doing or being simply average. If I’m not going to give my all, then what have I accomplished?” she says) but more so by how the values instilled in her by her grandmother continue to imbue her work.

Myra Haney Singleton, Ed.D., associate dean for student affairs, recounted just a few examples of Drayton’s contributions and leadership. She was named a Dr. Raymond S. Greenberg Presidential Scholar, and through the program worked on getting free HPV vaccines to low-income residents of North Charleston, her hometown. She was selected to be a member of the Paul B. Underwood Jr. Chapter of the Gold Humanism Honor Society, for students and faculty who demonstrate excellence in clinical care, leadership, compassion, dedication to service, and are advocates for patient-centered, humanistic care. She served two years as director of Student Mentors for Minorities in Medicine, worked in the College of Medicine’s summer prep program for minority and rural students seeking medical school admission and volunteered at local churches, schools and health clinics.

Singleton remembers one moment in particular. Drayton was in the habit of stopping by her office to chat, and one day when she came by, Singleton was in conversation with a student who was struggling. The student recognized Drayton and said hello, and something sparked in Drayton.

Another time when Drayton stopped in, Singleton was talking to a prospective student seeking advice for admission. Singleton asked Drayton to offer advice from her perspective, and Drayton immediately dropped what she was doing and printed an entire study plan for the MCAT, the notoriously difficult medical school admissions test.

She’s also, Singleton said, the only student to receive the Dr. Thaddeus John Bell M.D. Endowed Scholarship, a scholarship for African American students in any of MUSC’s six colleges, for two years in a row. In fact, in a rare move for a scholarship namesake, Bell himself called Singleton to talk about how impressed he was with Drayton’s work.

Drayton has excelled academically as well. Between her first and second year, she worked in the lab of Russell Norris, Ph.D., on a team that investigated how genetic variations in the heart valve cells of a developing fetus could later lead to mitral valve prolapse. She earned an author credit on the resulting journal article that was the cover story in Science Translational Medicine in May 2019.

During her fourth year, she worked with Michael Yost, Ph.D., in the Department of Surgery’s Human Centered Design program. When she first showed up in Yost’s office to talk about how she might participate, Yost said, he realized, “This person is absolutely perfect for surgery and research.”

She’s a self-starter – a crucial quality for someone in this program staffed by busy people who have no time for coddling – and a team player, Yost said.

The program put out a call to the surgery department for problems needing solutions. Submissions ranged from difficulty seeing well during certain surgical cases to how to help low-income patients who need expensive surgeries. The team then selected problems that members thought would have a significant impact if they could develop a solution.

Through the process, Yost said, Drayton learned a systematic method of identifying opportunities, evaluating what solutions already exist or could be adapted and then looking at possible solutions. She also got a taste of working in a multidisciplinary team. Academic medicine, Yost said, is – or should be – about innovation. Doctors working in academic medical centers are expected to lead the way in developing new techniques and solutions rather than simply relying on methods they learned in residency.

“I would love to see every medical student go through this exercise,” Yost said. “She’s well-positioned to be a leader.”

Not only is she a great student and collaborator, but she’s also “a genuinely nice, good person,” he said.

Drayton’s journey began in North Charleston. Although she had decided she wanted to be a doctor, she had no idea how a person might go about doing that. Luckily, two of her teachers at Alice Birney Middle School – now Northwoods Middle School – saw her potential and pushed her to apply to Academic Magnet High School. There, surrounded by similarly ambitious and high-achieving students, Drayton’s world opened up.

After college, she decided to pursue a Master of Health Information Technology degree at UofSC. She had always enjoyed computers and building apps, and she loved learning about data collection and technologies that she might one day incorporate into a medical practice, as well as getting an introduction to bioengineering and artificial intelligence. That program along with a job she held as a medical scribe turned out to be great segues into medical school.

And always, she had her family in her corner as her biggest supporters. Singleton remembers that the first she heard of Drayton was when she got a call one day from a woman who said, “My daughter wants to be a doctor. Can someone help her?” From that first cold call, Singleton reached out to Drayton and outlined recommendations to follow prior to applying.

Later, while reviewing applications, Singleton was floored by Drayton’s.

“It was amazing. She did everything. She went above and beyond the recommendations,” Singleton said.

That drive to succeed continued throughout her time at MUSC, Singleton said. Drayton said she came in expecting medical school to be difficult – and it was. But her expectations meant she was prepared to work hard and then push herself to work even harder. She never wanted people to assume she was capable of merely average work just because of where she came from, she said.

"Always keep the faith. Never let disadvantage or roadblocks hold you back from your true potential. Everyone is put on this earth to do great things, and I know for a fact everyone is going to achieve those things. It may not be in the time frame you wanted, but you don’t set those times. You just stay the course and do what you feel is right, and eventually, it’s going to happen."
Ka'la Drayton

When it came time to choose a specialty, Drayton considered both surgery and pediatrics. Ultimately, she knew surgery was her passion. She likes the hands-on aspect and that she must face a specific problem and figure out how to fix it.

“As soon I’m inside the OR, I’m focused on exactly what the problem is, and we can’t stop until we fix it,” she said.

She decided on a general surgery residency so she can experience all types of surgeries before deciding if she’d like to specialize further.

She is both nervous and excited as she prepares to leave her home state and begin her career. Because of the coronavirus pandemic, she won’t get the chance to walk across a stage in full graduation regalia, shake the university president’s hand and accept her diploma. She had hoped her mother, brother and grandfather would be there for that moment. Nonetheless, she knows how proud they are of her. Her grandfather, William Drayton, is a man of few words, she said, but she can see the pride in his eyes.

Drayton is thankful for her family and friends who have supported her and for the MUSC faculty and staff who have guided her.

“It’s been nothing but love from everyone I've met,” she said.

She also has advice for students following in her footsteps.

“Always keep the faith. Never let disadvantage or roadblocks hold you back from your true potential. Everyone is put on this earth to do great things, and I know for a fact everyone is going to achieve those things. It may not be in the time frame you wanted, but you don’t set those times. You just stay the course and do what you feel is right, and eventually, it’s going to happen,” she said.

Singleton said she has no doubt that Drayton will succeed wherever she is. 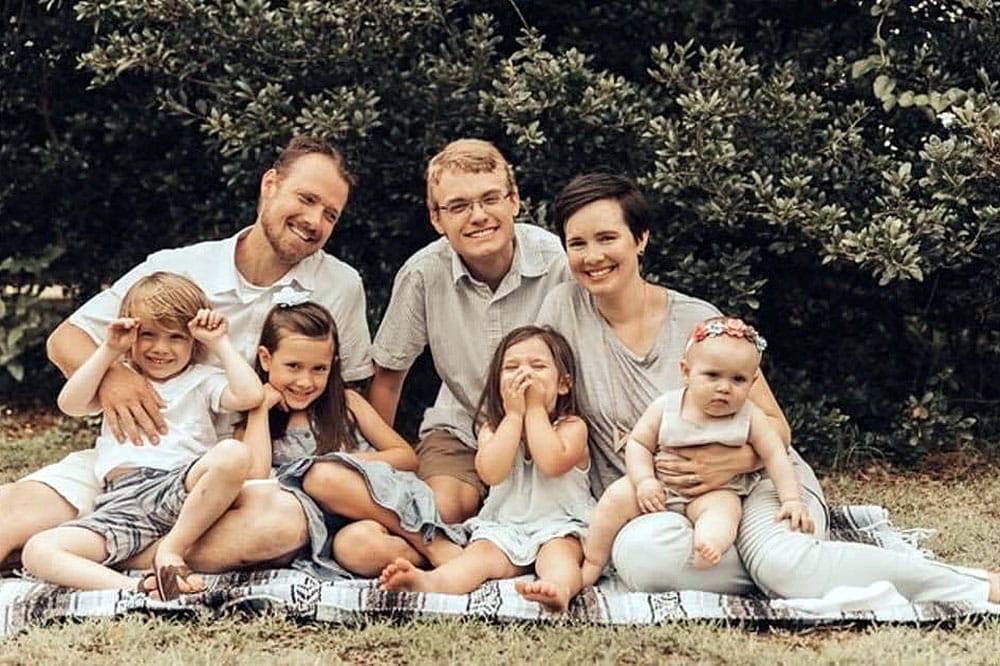 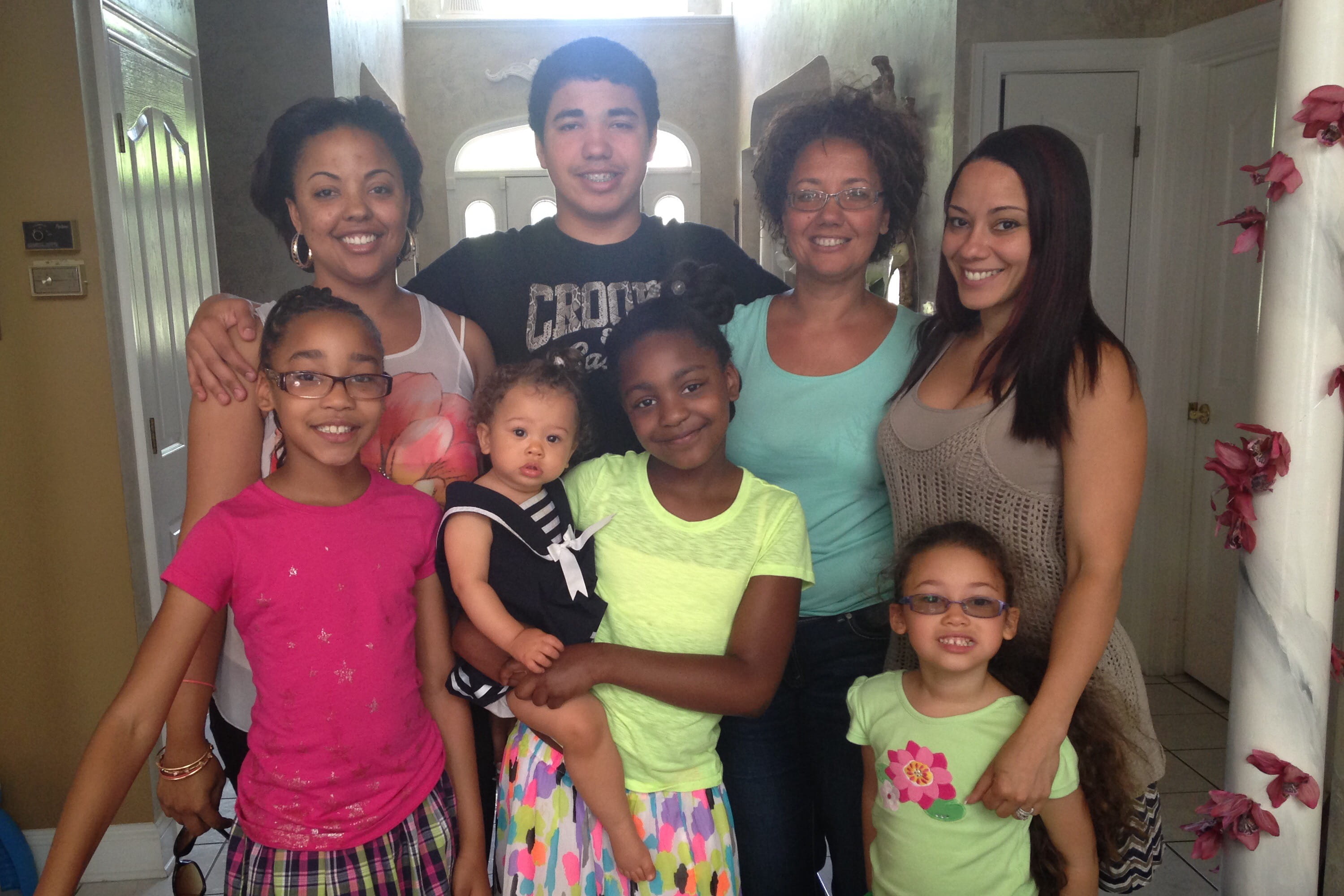 “It’s that call you dread as a parent. But you never think it will actually happen to you.” – Marcelaine Reneau, Ph.D. 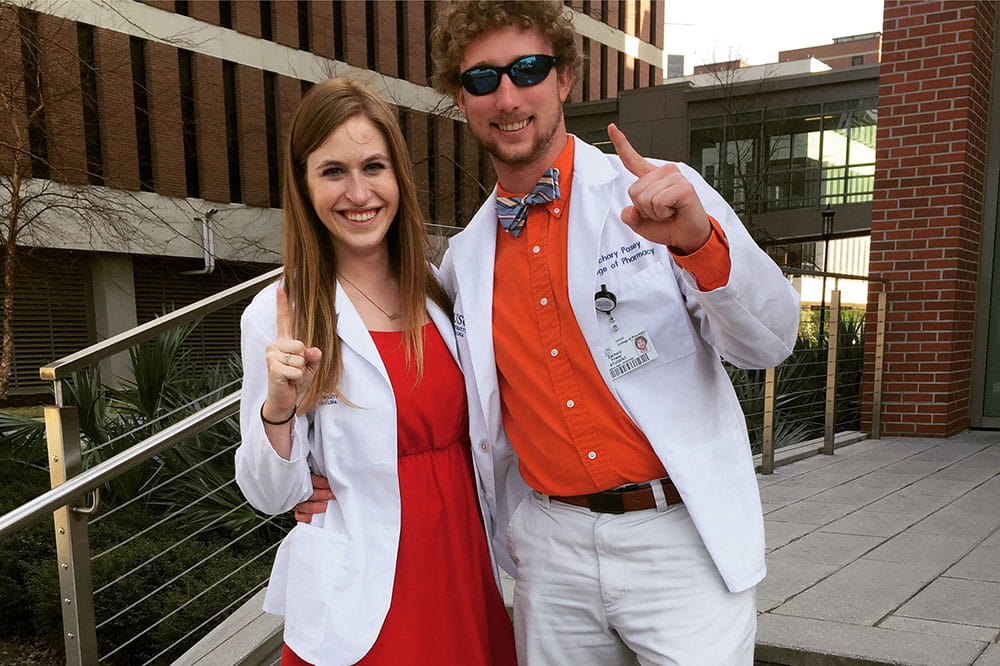 “You just look at them, and you’re like, ‘I’m proud that they’re representing the College of Pharmacy.’” 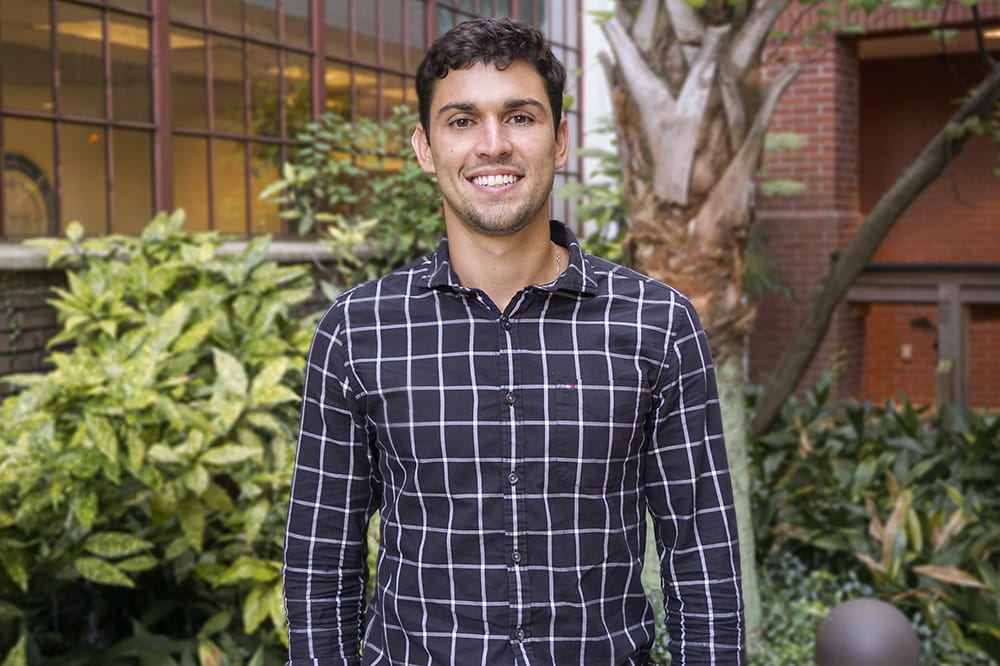 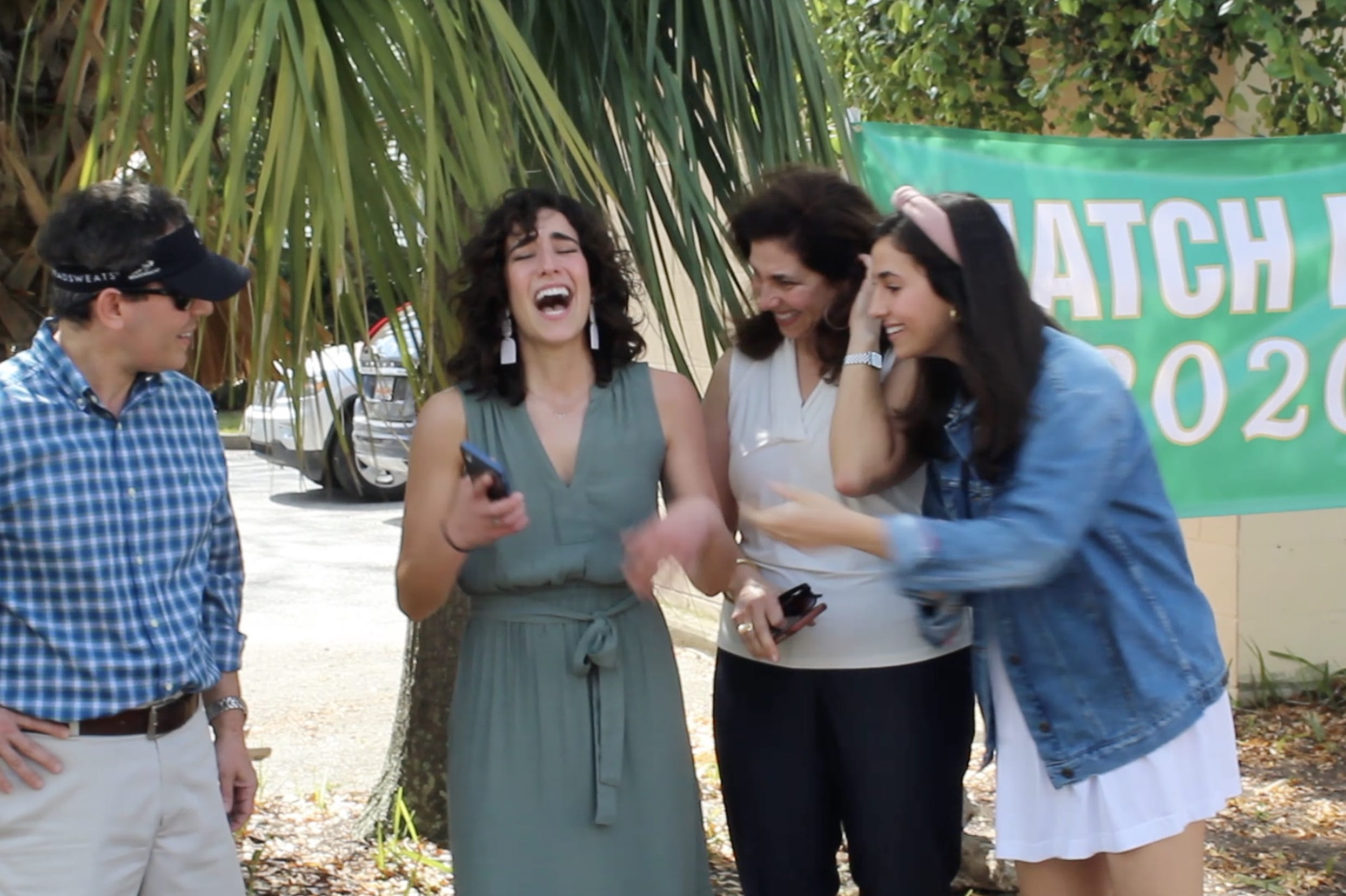 Match Day is the day medical students find out where they'll do their residencies. But with social distancing, 2020's Match Day was unlike any other.